5 travel-themed ideas to try at home this Christmas 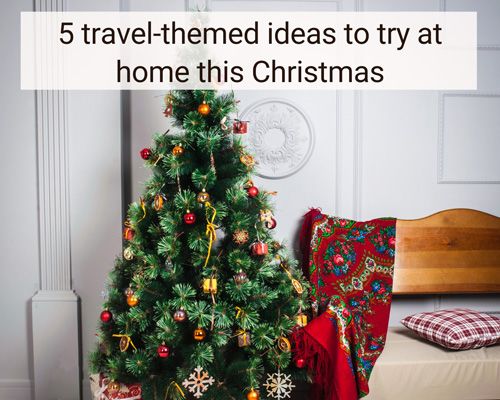 Christmas is going to look a little different this year – but that doesn’t mean you can’t make it exciting by trying out these travel ideas or Christmas traditions in Europe!

From celebrating the Icelandic “Christmas book flood” to telling the German story of the origin of the Christmas tree – or treating someone special to the gift of travel – these five ideas are bound to help you make the holiday more memorable. Read on…

As we all know, the new year closely follows Christmas. We wonder what we’ll do in the months to come, what changes we’ll make and the adventures that may be around the corner… reflections that inevitably inject the festive season with a little focus on the future.

Which is why we think that thinking ahead is a great way to celebrate the holiday! Stoke up the fire, grab a mince pie and start mulling over what experiences you’d like to have over the next twelve months – whether that’s visiting a famous wine festival in Italy, golfing at the foot of the Austrian alps or something else entirely. If you’d like a helping hand, we’ve got plenty of suggestions on where you might like to stay, too, along with several tailored itineraries. Planning European explorations over eggnog? Sign us up.

2. Buy a loved one a sustainable Gift Experience Voucher

Treat the traveller in your life this Christmas with one of our new vouchers!

We have over 70 available in our gift store, which range from weekend escapes to tours, afternoon teas and hotel stays. Our most flexible of these is the Gift Experience Voucher, which you can put towards a trip at any of our participating properties across Europe. Worth between 50 – 1,500 EUR, this voucher will partially fund or cover the cost of a stay in one of our castles, country houses, luxury villas or other. Better yet, each voucher is valid for five years from the date of issue, so your lucky recipient can take their time planning their dream getaway.

Better yet, each voucher is sustainable. Not only are they delivered electronically, part of what you spend is immediately donated to Global Forest Fund – a global environmental education organization – and is used to plant trees. Learn more here.

3. Tell a festive story from another land

Don’t want to regale your loved ones with The Night Before Christmas for the billionth time? Spruce up your fireside tales this festive season by telling a famous story from across Europe, instead. There are so many interesting Christmas stories from other countries to choose from – we’ve shared a few of our favourites to get you started.

If you’ve ever been in Italy in early January, you might have noticed people walking around with masks of old ladies on. This is because a lot of Italians celebrate “Befana” around then. In Italian folklore, Befana is the name of an old woman who delivers gifts to children on Epiphany Eve (January 5) much like Santa Claus…

… in fact, very much like Santa Claus. According to legend, she fills children’s stockings with either coal or candy depending on how good they’ve been, and arrives down their chimney. The biggest difference between the two is that Santa Claus rides around in a sleigh whereas the hooded Befana travels by broom, and is even said to sweep the homes of the children she visits!

But where did the legend of Befana come from? Well, according to one popular version of the legend, the Three Wise Men, on their way to visit the baby Jesus, stopped to ask Befana for directions. Though she didn’t know the way, she offered the men food and lodging for the night – an act they appreciated so much, they invited her to travel with them later. Befana refused and later regretted it – after her visitors left, she pursued them, leaving candy and coal for children on her way. While she never found the men again or, for that matter, the baby Jesus, she continued to leave offerings for children in the years after.

Germany, The Christmas Fairy of Strasburg

This story is apparently the origin of the Christmas tree! It follows a dashing count, Otto – a bachelor who had little interest in the maidens in his land – until one fateful Christmas Eve. He had organized a hunt, but got separated from his group and ended up at a magical spring dubbed the “Fairy Well”. Curious, Otto dipped his hands into the water, and when he brought them to the surface, realised his ring had been lost.

Sure that a warm hand had slipped the ring off his finger in the water, Otto returned home but could not stop thinking about the incident. Mulling over it later that night, he was disturbed by the sound of pattering feet outside his room, followed by the sound of music. He sprang out of bed and yanked open the door… only to be faced with the most astonishing Christmas tree you could imagine (and, according to legend, the first of its kind). On every branch was a decoration more radiant than the next, and surrounding it were dozens of dancing fairies.

All of a sudden, a beautiful woman approached. She announced herself as Ernestine, the Queen of the Fairies – and before he had the chance to utter a word, she dropped the ring he had lost earlier that day in the palm of his hand. Otto – overwhelmed by her beauty – immediately proposed. She agreed on one, strange condition: that he would never say the word “death” in her presence.

Otto readily accepted her terms and they were married the next day. What followed were nearly two years of wedded bliss, until the worst happened. On another hunting trip, Ernestine took so long to get ready that by the time she finally arrived, Otto grumbled that she would make “a good messenger for Death” for being so slow. She disappeared in a flash. Harangued by guilt and grief thereafter, Otto lit a tree every year in the room where they first met, wishing for her return.

Norway, The Cat on the Dovrefjell

Trolls, cats and a big dose of confidence are all to be found in this traditional Norweigan tale! On Christmas Eve, a man – on his way to deliver a white bear to the king of Denmark – came across a house. He asked for shelter, only to be told by Halvor the homeowner that trolls came by every Christmas Eve. They wreaked havoc and often forced the family to flee. But the man – emboldened by the presence of his snowy white bear – said he’d stay anyway.

That night, the trolls came by as promised. They feasted and drank, rudely making their way through the home’s wares. One troll – on seeing the bear – began to tease it, calling it “Kitty”. But the bear wasn’t to be trifled with. It stood on its legs and roared, driving them out of the house in a panic!

The next year, the trolls returned and nervously asked Halvor if he still had “the cat”. Though the man and his bear were long gone, Halvor – seeing an opportunity – said that he did, and that the cat had had seven kittens who were even more ferocious. Needless to say, the trolls never came back!

4. Try these Christmas traditions in Europe

There are some very popular (and entertaining) ways people celebrate Christmas across the continent, which you can try at home.

Want an easy tradition that’ll boost the festive ambience in your lounge? In Ireland, families often light a tall candle to put it in their windowsill, which is meant to represent a beckoning light for Mary and Joseph. They also occasionally celebrate “Little Christmas” – a nickname for the Catholic celebration, feast of Epiphany, on January 6. This is celebrated in Italy, too, along with many other festive activities. For instance, Italians don’t eat meat on Christmas Eve, opting for lavish fish dinners or pasta instead (to, supposedly, “purify” their bodies ahead of their Christmas Day feast!).

Finally, in Iceland, there’s a tradition called the “Jolabokaflod” – the Christmas book flood – which is when you give and receive books on Christmas Eve to read by the fire together in your snuggliest pyjamas… sounds like bliss to us.

5. Visit a virtual Christmas market (and still do your shopping)

Dining on chimney cake and sipping mulled wine while wandering between snow-capped stalls is one of the most time-honoured Christmas traditions in Europe – except for this year, of course.

But Christmas markets live on online. In Berlin, you can immerse yourself in the magical atmosphere of Charlottenburg Palace through a virtual tour. Alternatively, head to Vienna from your couch with a 360 visit of Der Kleine Eistraum, where you can marvel at their ice rink, festive fairy lights and more. You can even cut out the middleman and head straight to Santa Claus’ own village in Lapland with this live stream, which is fixed to the main square of Santa’s village (where we imagine some exciting things will happen closer to Christmas)!

There’s no harm in doing a little forward-planning, either. Prepare a trip to one of Europe’s finest Christmas markets in 2021 with this handy guide.

What activities have you got lined up for Christmas this year? Are there any Christmas traditions in Europe you’re looking to replicate at home? Tweet us, message us or send us a Story.