Three historic stories from some of our most magnificent hotels 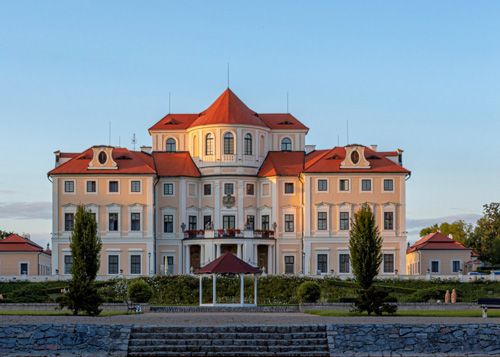 When you visit a Historic Hotels of Europe property, you know exactly what to expect. Beautiful architecture, cultural delights and a wonderful history just waiting to be learned. But why wait until you arrive before getting to know some of our properties’ rich pasts?

There are some wonderful stories and facts just waiting to be learned about our historic hotels. From exiled lovers to princes in pubs and the destiny of a certain Czech dynasty, read on to discover three of our favourites.

The stunning Roch Castle – situated on a volcanic rocky outcrop and close to St. Bride’s Bay – has looked out across the Welsh countryside for nearly eight hundred years. Built in 1195, it’s seen many of England’s most notable historic periods, as well as had some eccentric and fascinating characters within its walls… including, perhaps most famously, the ill-fated Lucy Walter.

Born in 1630 and raised in Roch Castle, Lucy Walter was a member of the Welsh gentry. Her beauty was so famous that, on turning seventeen, she was immediately whisked off to court, little knowing that a royal romance awaited her there. Soon after arriving she met the Prince of Wales – later known as Charles II – and they fell deeply in love.

Their simple union was short lived, however. When Cromwell exiled Charles II to France, Lucy took some drastic steps to get there. It’s rumoured that she strapped down her chest and cut off her beautiful hair, in order to smuggle herself – along with the crown jewels – across the sea.

Once reunited, Lucy became his mistress and bore him two children. Despite the fact that they were both illegitimate, Charles II still chose to recognise his son, James, as his eldest child – an act that was unusual for the time – bestowing him with many honours and later giving him the title of the first Duke of Monmouth.

Sadly, the same regard wasn’t shown to Lucy. Over time she fell out of Charles’ favour as he became more interested in his other courtesans, and it’s said that she died around the age of 28 in Paris. Some claim that Lucy’s ghost returned to Roch Castle – the place where she’d been the happiest – and that she still wanders its battlements today…

Once the childhood home of the daring Lucy, Roch Castle now caters to all travellers seeking a slice of rural heaven. Between its stunning location – nestled in the heart of the endlessly enchanting Welsh countryside – and elegant interiors, it’s bound to surpass even your grandest expectations. Find out more

This property was a long time in the making – four hundred years, to be exact! While it first began to take shape back in the 1100s, the main building was only finished in the 1500s – though fortunately, it seems as though it was worth the wait. Schwarzer Bock quickly became a crucial part of Ansbach’s entertainment culture, and even catered to those who wore the crown…

A tavern so good that royalty went regularly

In the 15th century, Hotel Schwarzer Bock was a tavern, dishing up traditional German staples and serving as a place for weary travellers to rest their heads. But it wasn’t exclusively used by the everyman – far from it. It actually became a favourite haunt of German royals, famously including Luitpold, the Prince Regent of Bavaria.

While Prince Luitpold never slept at Schwarzer Bock – the royal castle was only next door, after all – he did meet with his officers for drinks there on several occasions, thanks to his role as the head of the local lancers’ regiment. The bustling Ansbach property even hosted garden concerts for members of the regiment’s birthdays, which royalty also attended.

This would be a strange sight today – walking into your local pub or inn to see monarchs making smalltalk with your neighbours – and really, it was the same back then. You would never find members of the royal family mingling with the public in countries like Austria or Prussia, in the same way that they did at Schwarzer Bock. But that was just how things were in Bavaria: it had a down to earth culture, and even the king himself did not stand on ceremony too often. Instead he valued simple pleasures, and it’s said that when he went hunting in the woods of Franconia or explored the southern Bavarian mountains, that he always requested Ansbach Bratwurst for his supper… straight from the kitchens of Schwarzer Bock itself.

Although Germany no longer has a royal family, Schwarzer Bock is still adored by many and is even recognised by the local chamber of commerce for its outstanding local food. Its owners, the Fuhrmann family, have plenty of advice for guests looking to experience the property like the monarchs did, too: including tips on how to spend your time and which rooms to book for the most regal repose. Discover more.

Though Chateau Liblice finished construction in 1706 – commissioned by Arnost Josef Pachta from the famous Pachta dynasty – 1863 is when things got really interesting for the historic property, when it was bought by the countess Antonie Wallenstein. With her incredible flair for design, she redecorated the house in an extraordinary neo-Renaissance style, drawing inspiration from the National Theatre in Prague.

From rags to riches

More interesting than Antonie’s eye for detail, however, was her story. Before she became a countess, she’d been a poor girl with no prospects – that is, until she fell in love with Georg, an aristocrat from the Wallenstein dynasty. He returned her feelings, but there was a long road ahead for the two lovers. Nobody approved of the match, and they had to battle social expectations and family pressure in order to be together. The two persevered, and once Antonie bore two boys – Ladislav and Georg – the Wallenstein family finally condoned the relationship. After receiving their blessing, the couple went on to have one more child, a girl called Christiana. Tragically, on the same day she was born, Georg – her father and Antonie’s husband – died.

A couple of years later, Antonie bought Liblice Castle. She passed away there in 1901 after outliving both of her sons, making Christiana the sole heiress. It wasn’t the norm for a woman to inherit back then, but as Antonie had done by marrying Georg, Christiana defied the odds.

Eventually, she married Leopold Thun-Hohenstein and bore four children. They were the last family to own the property.

Though the castle has been lovingly restored and kitted out for modern guests, its rich history can still be felt throughout, from the old Bohemian meals served in the on-site restaurant to its restored Renaissance flourishes. If that weren’t enough to intrigue you, it recently won the award for the best 4-star hotel in the Czech Republic. Explore more.

Meet the team behind your dream destination
September 24, 2022

Through the keyhole: Discover who lived and stayed in Europe’s historic hotels
December 31, 2021