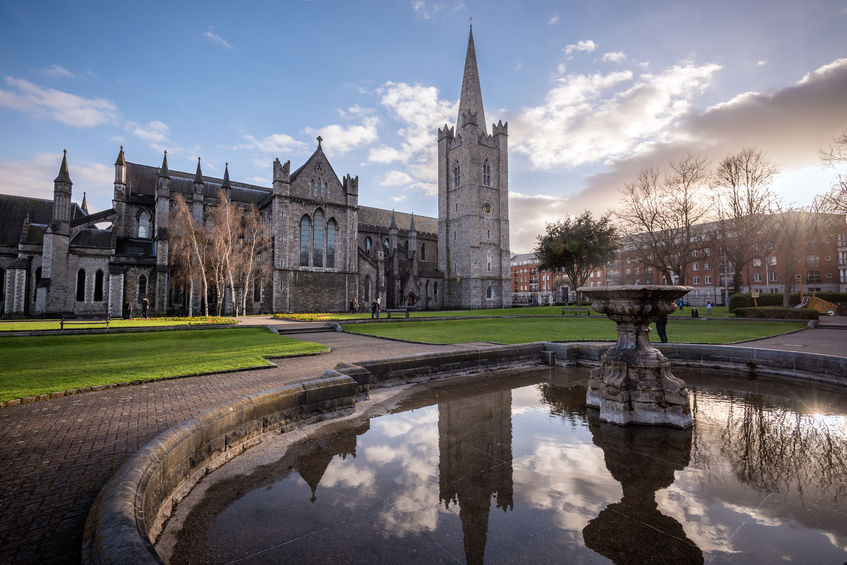 Dublin’s crowning glory is its people. Taxi drivers open up to you like you’re family, and you’ll go for a pint and end up with a friend for life – which is why we look to the happy-go-lucky locals for golden insider hotspots. From the best pub for a Guinness (clue: it’s not the Storehouse) to the ultimate place to stay in the capital, here’s how to do Dublin like a Dubliner:

Dublin is home to several Michelin starred restaurants. Aoife O’Meara at LikeALocalGuide recommends booking in advance for the superb-value pre-theatre menu at Chapter One Restaurant. From lobster and bacon-stuffed pig’s tail to wood pigeon with foie gras, the menu speaks for itself.

If you’re not from the area, you might miss Michelin Star L’Ecrivain Restaurant tucked away in a petite courtyard just off Baggot Street. Which would be a shame, because the Irish-cum-French dishes are too good to miss – especially the braised beef with parmesan gnocchi.

Dublin-based travel writer and author of ‘Secret Dublin: An Unusual Guide’, Pól Ó Conghaile knows a thing or two about dining haunts in the city. He recommends heading to Restaurant Forty One for a braised-lamb-lunch, touting the dish as “a slow-cooked treasure” with a herb coating that “looks like a slice of Ireland”.

Real 40-foot trees, a Louis XIV bust, grand piano and jazz-infused soundtrack – it can only be Café en Seine, Dublin’s haven for history buffs. Dating back to 1798, the building has seen French prisoners of war, King George IV and Queen Victoria’s dressmaker within its walls. Expect fine French fare and incredibly opulent interiors.[/vc_column_text]

[vc_single_image border_color=”grey” img_link_target=”_self” img_size=”large” image=”2356″][vc_column_text]For its size, Dublin has more pubs, bars and clubs per capita than anywhere else in the world. But Dublin-based Kevin Gleeson at Spotted by Locals admits it’s often tricky for tourists to find an authentic Irish bar in the heart of the city – he points to John Fallons, just metres away from Saint Patrick’s cathedral. “There are far more opportunities to strike up a decent conversation with a local than you might get in one of the larger, trendier establishments,” he says. “And after all, this is what has made the Irish bar internationally famous.”

Locals also know to skip the Guinness Storehouse if you want to avoid crowds of tourists. Instead, check out the Jameson Distillery for a sensorial tasting session. But if you’re still hankering for a pint of the black stuff, look no further than John Kavanagh in Prospect Square. This hidden treasure is built into the wall of Glasnevin cemetery, earning its nickname of ‘The Gravediggers’ from Dubliners. There’s no phone, TV, singing or dancing allowed, in order to keep the bar as close to its original 1831 appeal.

If it’s raucous music you’re after, though, Temple Bar is the most popular place to go for a lively Guinness-in-hand photo opportunity. Locals will avoid its tourist-crammed bar, instead recommending the venue’s quieter, more creative side during the day – Temple Bar often has arts, crafts and jewellery on sale, and a record store, too.[/vc_column_text]

[vc_single_image border_color=”grey” img_link_target=”_self” img_size=”large” image=”2357″][vc_column_text]Grab your own slice of history at Ulysses Rare Books, a quaint, higgledy-piggledy bookstore specialising in 20th century Irish literature. Pick up a first edition from the literati themselves: James Joyce, Oscar Wilde, W.B.Yeats and Samuel Beckett all fill up shelves here.

If you’re visiting Dublin for the weekend, hop a bus from the city centre to the Sunday market in the seaside town of Dun Laoghaire. Held at People’s Park which dates back to 1890, you’ll find over 50 vendors selling everything from wine and pottery to cheeses and art. It’s a great place to pick up something unique and enjoy a cuppa in the Tea Rooms.

If you’re all Guinness-ed out, buy a different kind of beverage at Wall & Keogh – tea stockists of many a Dublin cafe. With over 150 varieties of tea, choosing just one is difficult. Rose O’Donnell at Spotted by Locals recommends ‘Put the Cat out’, a chamomile and lime combo.[/vc_column_text]

Dublin’s Georgian past is remarkably preserved in Merrion Square’s architecture. Originally laid out in 1762, the area is a hotbed of culture: visit the Natural History Museum, Leinster House and the National Gallery of Ireland.

Four Georgian townhouses in the area form the most luxurious 5-star hotel in the capital, Merrion Hotel. If you can drag yourself away from the exquisite guest suites and ultra-serene pool, the hotel’s 2-star Michelin Restaurant Patrick Guilbaud will be waiting, with a tasting menu dreams are made of.

Move from Merrion’s elegant Georgian park to Croke Park, home of the Gaelic Athletic Association (GAA) and Gaelic Games. Locals recommend booking in on match day to experience one of the fastest sports on grass – the ancient game of hurling.[/vc_column_text][vc_single_image border_color=”grey” img_link_target=”_self” img_size=”large” image=”2354″][vc_column_text]

No Dublin itinerary is complete without a trip to the architectural icon of its patron saint – St. Patrick’s Cathedral. It’s one of few buildings left from medieval Dublin and the tallest church in Ireland, built to honour Saint Patrick in 1191. Visit during school term and you’ll get to hear the world-famous choir in full glory.[/vc_column_text]

Instagrammable places to put on your bucket list
April 29, 2021