Not just a hotel: 3 fascinating European stays with a story to share 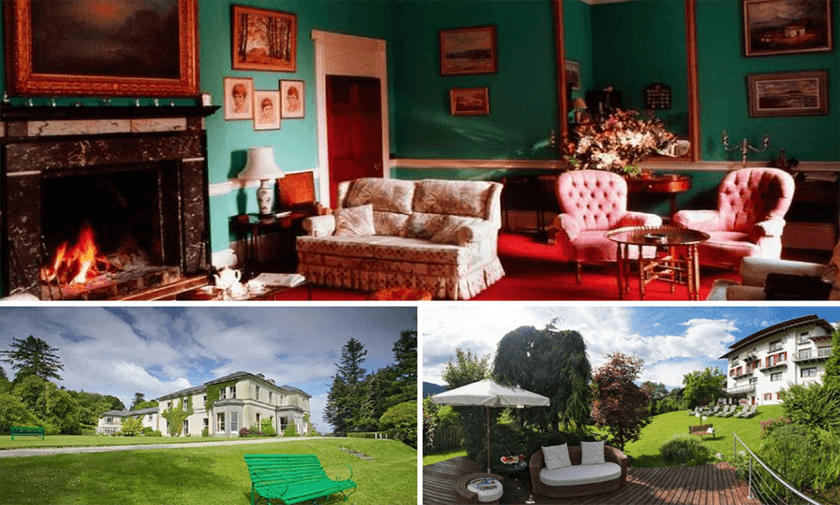 Whether we’re plonking ourselves in front of Michaelangelo’s David in Florence or exploring the ancient monastery of Skellig Michael in Co. Kerry, travel is all about putting ourselves at the heart of history.

But you don’t always expect it from the hotel you’re staying in. That’s where the 400 properties represented by Historic Hotel of Europe differ – each has a story to share, giving every stay that extra special touch. Wondering where to set your compass next? These three fascinating hotel stories may inspire your next holiday…

The one that was won in a card game:

Local, homegrown, seasonal ingredients don’t travel far to get to Currarevagh House – although you might want to. This hidden gem sits on the banks of Lough Corrib in Co. Galway, and is worth travelling to for what its owners describe as a “good, old fashioned adventure”. Imagine having a picnic packed for you, with a half bottle of wine, then setting out upon a tranquil Irish lake to find yourself a deserted island. That’s exactly what your hosts – Henry and Lucy Hodgson – will encourage when you stay at this Victorian country house. They’ll probably even share recipes for their scrumptious parmesan biscuits or tangy marmalade, too.

From the lavish Edwardian breakfasts to the unparalleled personal service, it’s this old-world, traditional character that makes Currarevagh such a unique stay. Henry’s great grandfather, seven times back, would be proud. He’s the man who won the property in a card game, before opening its doors as a guest house in 1880. Before then, he’d made his fortune from tin and copper in the area, putting two steamboats on the lake named the Lioness and the Tigress.

Henry and his wife Lucy, both trained chefs, brought the Hodgson touch back to the property in 2008. They’ll greet you like a friend, then ply you with hake and tarragon fish cakes, roast rumps of Irish beef, and pecan and ginger treacle tart. Everyone gathers in the drawing rooms before dinner and sits at the same time – simmering with understated country charm that will have you wishing you could move in for good.

The one with the (almost) sunken cross:

The building now home to Hotel Alte Goste has watched over Puster Valley’s rural landscapes and nights alive with stars for almost nine centuries. Nestled between Brunico and Monguelfo, this south Tyrolean region was one of the most important connections between the Holy Roman Empire and Italy – and strong ties to this history continue to fascinate hotel guests today.

First mentioned in a Tyrolean document in 1142, Alte Goste was the first guesthouse in the region. It’s also home to one of Europe’s iconic wayside crosses: you’ll find the religious monument below Hotel Alte Goste on the ancient road of Gostnerhof (Old Goste). These Christian crosses have multiple stories behind their erection: markers of routes for Christian pilgrims, protection for roads and fields, or shrines to local saints.

This particular wayside cross was discovered by grandfather Johann Zingerle. When the Olang lake was built in 1958 and the reservoir was filled, he was rowing a boat to the crossroads when he came across the wooden crucifix – rescuing it from the rising water and taking it to safety. According to archeology reports, the cross is between 400 and 450 years old.

The one owned by the same family for seven generations:

Coopershill House has antiques-filled rooms, packed with old crystal and silverware that have never once been stolen by any of the hotel’s guests. That’s because many of its repeat visitors feel like a stay in this 18th-century country house is like visiting good friends – and you don’t steal from friends.

It’s been this way since it was built for the O’Hara family in 1774. In 2005, Simon O’Hara became the seventh generation to take the helm. After years working as a safari guide in Nairobi and then setting up his own travel business in Mexico, the adventurer is happy to be home in Co.Sligo. Even more so, because the house is where O’Hara met his now-wife Christina, an award-winning, Ballymaloe-trained chef who worked for Simon’s mother in the hotel.

The atmosphere at breakfast is noticeably cheery, perhaps because the menu delivers the works, including homemade muesli, bread and yoghurts as well as freshly-laid eggs. This is also the perfect place to sink your teeth into a venison sausage, which comes from Coopershill’s own farm set up by Simon’s parents, now in their 70s.