Summer events in the Swiss Alps 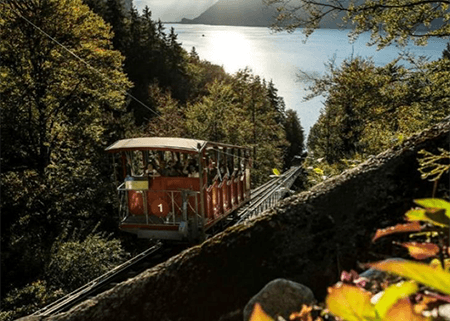 From Basel to Zürich, Switzerland’s cities are creative and cultural gems that would be hard to leave, were it not for the spellbinding Alps. But even in remote mountain regions, there are still buckets of cultural events to dive into. Here are our favourites:

Since 1938, the coolest address in Kloster has served as a high-society magnet, seducing famous faces such as Juliana the Queen of Holland, Gene Kelly, Greta Garbo and Anthony Perkins. The original architecture remains, with woodwork, murals and period furniture paying tribute to Chesa Grischuna’s rich past.

As befits a mountain retreat nicknamed ‘Hollywood on the rocks’, your hosts will make sure entertainers are around to keep up the festivities until the early hours. If you can drag yourself from the Swiss bolthole, there are plenty more events in the Kloster area. The region’s largest street party takes place on August 26 2017 – a nostalgic smorsmagord of street food, local music, traditional handcrafts and boppin’ tunes from the 20s to the 50s.

Head to the heart of Klosters on September 16 and you’ll be able to witness that spectacle of the Alpine Parade: decorated cattle are driven down from alpine pastures to the sound of jovial folk music. Expect an unforgettable Swiss party with a farmers’ market, petting zoo and lots of local products to pick up and take home.

St Moritz knows how to throw a bash. The alpine resort has hosted the Winter Olympics twice and, come summer, is the to-go-to destination for lake-based activities. One of its oldest partiers is Badrutt’s Palace Hotel – a historic luxury stay where every room is different. Its built around a serene lake and emerald forest and decorated like the Swiss holiday home of an heiress, with Renaissance-style wood and Neo-Baroque ceiling paintings.

Badrutt’s has retained its castle-like character – in August and September you can dine regal-style, with the culinary adventure event taking place in the palace wine cellar. If you’d prefer finger food, the Summer Afternoon Tea takes place in Le Grand Hall of the building daily in late summer. Expect aromatic teas, champagne pops and an array of freshly-baked delights.

Hotel Waldhaus Sils, which opened in 1908, has always been the place to go in Sils Maria. From Albert Einstein to David Bowie, artists and intellectuals aplenty have flocked to the magnificent landmark hotel  – it has culture in its genes.

This year, you can experience classical music in its full glory: from September 17 to 24, the Engadine-based gem will be hosting an eight-day musical spectacle. Orchestral performances are interspersed with excursions to the picturesque Sent, Tirano on the Switzerland-Italy border, and Zuoz – one of the most beautiful villages in the Upper Engadine.

When it was unveiled in 1874, Grandhotel Giessbach brought a welcome jolt of glamour to Lake Brienz. The grand designs of its elegant lounges, rooms, suites, restaurant and spa areas still exude splendour in the land of mountains, forests and alpine meadows.

It’s won awards for its beauty, cuisine and hospitality, so mark September 22 on your diary for its sparkling upcoming event: piano duo Stephanie Trick (US) and Paolo Alderighi (IT) are in the building to shake the walls with swing, harlem stride, ragtime, boogie woogie and the best of the Great American Songbook. Tickets include an overnight stay in the romantic hotel and admission is free for children.

The coast or the cliffs? How to choose between a mountain or seaside break
August 28, 2022

Historic hotels you can hire: 4 reasons to rent a property in Europe this summer
July 23, 2022