Riga bucket list: 10 unique things you must do in Latvia’s capital 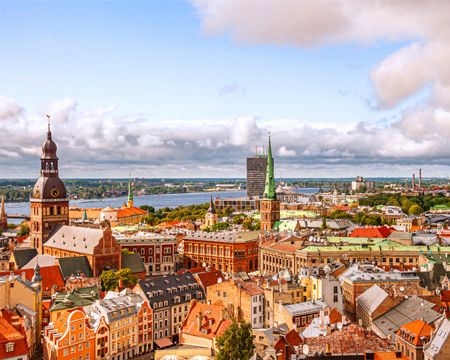 10 unique things to do in Riga

Riga is certainly one of Europe’s most underrated jewels. Between its rich history, cultural activities and vibrant local attractions, it’s impossible not to be enchanted by the charms of Latvia’s capital. But what, exactly, are the best things to do in Riga? Keep reading to find out

1. Attend a cultural event at the House of the Blackheads

Once written across the entrance to the House of the Blackheads were these words: “Should I ever crumble to dust, rebuild my walls you must”. This historic wish has certainly been honoured, for while the building – originally erected in the 1300s – was destroyed during World War II, it was fully rebuilt in 1999, and has been going strong since.

Now, people from around the world flock to Latvia’s capital to visit this resurrected site, which acts as both a requiem for the building that once was as well as a fascinating tourist spot. Admire its Dutch Renaissance facade before you traverse its rooms, reliving years gone by through its contrasting luxury halls and medieval cellars. Balls, concerts, classes and other exciting events are also hosted year-round at the venue, so it might be worth researching what’s on before planning your trip.

The oldest complex of dwelling houses in all of Riga – dubbed the Three Brothers – is an eclectic trio of buildings, supposedly constructed by descendents of the same family.

The first building, or “brother” – erected in the late 15th century – oozes Gothic and Dutch charm. Back in its heyday it functioned as one large room for trade, work and everyday living, and despite the years has retained much of its original appearance.

The middle building was built in the 17th century. Its light lemony walls and various intricate elements – once more heavily influenced by Dutch architecture – make it arguably the most striking of the “brothers”. Make sure you take a moment to read the inscription above its entrance, which reads Soli deo gloria!” — “Glory to God alone!” in Latin.

The youngest “brother” was built not long after its predecessor, and is the narrowest of the three buildings. Its green facade was, apparently, designed as a “mask” to ward off evil spirits. Part of the Latvian Museum of Architecture, you can explore elements of this building – along with its “brothers” – during your visit. A brilliant way to learn more about their shared history.

3. Muse and meander through Old Town

Historic travellers will doubtlessly describe Old Town as one of the best things to do in Riga. There are myriad activities on offer, here, from enjoying pelēkie zirņi ar speķi (Latvia’s national dish) at one of the city’s top restaurants to exploring churches and strolling down the city’s narrowest street. Stretch your arms, and you’ll find you can touch the walls on either side of the street at once!

What’s wonderful about Old Town is that you can learn so much about the city in just a small area, and chart how it’s grown throughout the years. Groups of craftsmen and artists built the bulk of the buildings here across several centuries, creating an eclectic and vibrant atmosphere filled with Romantic, Gothic and Baroque architecture, to name a few. You’ll find plenty of other culturally-significant spots in Old Town, too, including Riga Castle and the Powder Tower.

Vērmanes Garden is the city’s second oldest public park, and one of our favourite things to do in Riga. At the cross-section of some of the city’s most exciting streets, it’s full of things to see.

Snap a photo of its sculptures – which range from stone lions to a statue of the park’s benefactor, Anna Gertrud – and lounge around fountains during a reposeful hour or two. Don’t forget to swing by the wooden open-air stage, as well. Some of the city’s most memorable concerts and performances have happened here, and, when there isn’t an event, you’ll usually find this spot populated by the city’s most talented chess players.

No time of year is a bad time of year to visit Vērmanes Garden, either. It retains its beauty throughout the seasons — whether it’s bursting with fresh blooms in the height of summer or decorated by fairy lights in the trademark frost of winter.

5. Become a hat expert at The World of Hat

The World of Hat might sound as though it’s come straight from the pages of a fairytale, but it’s actually one of Riga’s most fascinating spots! This tiny museum houses one of the world’s largest hat collections, with over 400 pieces of traditional headwear just waiting to be discovered.

A charming building based in the Art Nouveau district, The World of Hat offers a “trip around the world” through five rooms, each of which houses dozens of carefully-curated hats collected by the museum’s founder. Examine helmets, headdresses, masks, wreaths and more while learning about a variety of global cultures, from the famous to niche. Check out the expansive collection here.

Back in Riga, assign an afternoon to ambling around the city’s Art Nouveau buildings with a coffee and Latvian pastry in-hand.

Even if you don’t know anything about architecture, you’re bound to be amazed by these flamboyant structures. Usually painted in bright pastel colours, these beguiling buildings are crammed with carvings – from mythic dragons to gasping human faces and austere owls.

There are plenty of photo-ops to be had as you track down each building, though it may take you some time. Riga actually boasts one of the largest collections of Art Nouveau buildings in all of Europe, with over 800 scattered across its streets! Think you’ll find them all?

With so much time spent on your feet during your trip to the Latvian capital, make sure you dedicate some time to sitting back and sampling the city’s most famous drink: Black Balsam. This “legendary” herbal bitter dates back over 260 years, and along with its historic significance, is totally unique in both its flavour and the way it’s made. In fact, only two people – the master distiller and their apprentice – know all the details of the single-barrel process required to create it. How mysterious…

This much-beloved beverage contains 24 all-natural ingredients, giving it a varied flavour that’s delightful on its own or in a cocktail. But don’t just take our word for it: Black Balsam has won over 100 international awards! Don’t miss tasting this tipple on your list of things to do in Riga, then.

8. Marvel at the mountain-shaped library, Castle of Light

Here’s something you may not know. In Latvian literature, a “castle of light” is a metaphor for the wisdom regained after overcoming adversity like war or invasion.

Many say that there’s no better place to find wisdom, either, than in the pages of a book. So it stands to reason that Latvia’s National Library – designed by Latvian-American architect, Gunnar Birkerts – takes its title from this popular adage.

Erected in 2014 on the banks of the Daugava River, this contemporary structure is a true eye-catcher. Between its dozens of windows, angular glass pyramid and unique shape – which looks like a mountain against the city’s skyline – this impressive building is a haven for literature lovers, locals and travellers alike.

Heading upwards through the building’s 12 floors, you’ll come across countless books, music sheets and cultural tchotchkes, along with a purported 1,000 snuggly places to read. At the top of the building, you’ll enter its iconic “glass flame”, which offers stunning panoramic views. If that wasn’t enough, the library also has an auditorium, gift shop, cafe and permanent exhibition, which studies the effect books have had on Latvian culture across science, cartography and music, to name a few. Now that sounds like a clever way to spend a wonderful day in the city, don’t you think?

Pick up a scrumptious souvenir or sample even more of Riga’s delicious wares at the Riga Central Market. This food-focused market is the number one spot to buy local products, try homemade recipes and dine on everything from oysters to hot dogs. With anywhere between 80,000 to 100,000 people visiting the market each day, it can be a little overwhelming, which is why we’d recommend looking into a food tasting tour to help you navigate the hustle and bustle like a pro.

In keeping with Riga’s strong architectural theme, the market is impressive to see, too. Its facades are built in Art-Deco style, and elsewhere, you’ll discover brick warehouses dating back to the 1800s and the outdoor area, Spīķeri, which hosts events such as open-air film showings and flea markets.

Want a more hands-on experience of old-world Latvia? Head thirty minutes outside of Riga to the Ethnographic Open Air Museum, which, among other things, demonstrates how people used to live across the country.

Walk through a staggering 118 historical buildings from Latvia’s four provinces (Kurzeme, Vidzeme, Zemgale and Latgale), built between the 17th to 20th centuries. Including the homes of farmers, fishermen and craftsmen, each historic home is like a miniature exhibition in itself – containing old tools and furnishings that signal how the inhabitants used to live.

This unique open air museum is especially enticing between May and September. Folk artisans, including potters and blacksmiths, flock to the museum to perform and lead demonstrations. Try your hand at a huge range of activities and create your own memorable crafts with the help of experts. If you time your visit well, you can also experience one of the museum’s traditional events, such as the Harvest Festival.

With so much to see, you’ll likely have to devote a whole day of your holiday to visit – but as one of the most memorable things to do in Riga, the museum is completely worth your time.

Making memories at the Metropole hotel

With these ideas, you’ve got more than enough inspiration to start planning your trip to Riga. But you’re missing one crucial detail… where you’ll stay!

One of our finest historic hotels, the Metropole in Riga, is well worth your consideration. With 88 elegant rooms and world-class service – all within a boutique setting – it’s the perfect place from which to explore the city’s endless charms. Ready for the Latvian trip of a lifetime?

Which of these things to do in Riga intrigues you the most? Let us know what you’d like to see over on our Facebook page.

We love the changing of the seasons! Here’s where to spend spring in Europe
March 9, 2022

Love is in the air: Your guide on how to celebrate Valentine’s Day in Europe
February 10, 2022